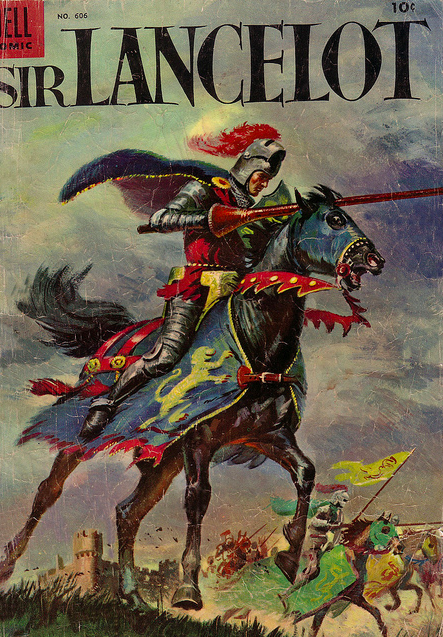 At first glance, it’s hard to ignore the visceral parallel of a knight named Arthur with a fabled sword appearing in each canon. But look again! Who better to fulfill the role of Lancelot du Lac, King Arthur’s First Knight, than Arthur Dayne, Sword of the Morning, almost universally reckoned to be the finest knight who ever lived? Here’s a scholarly description of Lancelot:

In Chretien de Troyes’ work Lancelot is portrayed as not only the bravest of knights, but one that everyone he meets is forced to describe as uniquely perfect

Compare with Ned’s and Jaime’s descriptions of Arthur Dayne

the finest knight I ever saw was Ser Arthur Dayne, who fought with a blade called Dawn, forged from the heart of a fallen star. They called him the Sword of the Morning, and he would have killed me but for Howland Reed

I learned from Ser Arthur Dayne , the Sword of the Morning, who could have slain all five of you with his left hand while he was taking a piss with his right

Another detail of note about Lancelot is the name of his castle and the location of his final resting place. Joyous Gard. Formerly called Dolorous Gard, the name was changed to Joyous Gard after Arthur and Gwenhwyfar visited as his guests. Gard is an old english word for yard or garden, used in this instance to describe a castle in the wilderness. If it were a simple watchtower rather than a castle, it might well be called the Tower of Joy. While there’s no indication that the Daynes owned that watchtower in the Red Mountains, it is near to their family holdings and is, without a doubt, the final resting place of Ser Arthur.

Chretien de Troyes is the medieval poet whose tale “The Knight of the Cart” introduced the Lancelot-Gwenhwyfar affair to the medieval world. In his story Lancelot rescues Gwenhwyfar, who has been abducted by Melwas, also known as Meleagant. His quest portrays the struggle to balance his role as King Arthur’s warrior within the framework of courtly love and his love affair with Gwenhwyfar. In order to reach her to effect the rescue, Lancelot must travel in a cart, which the audience understands to be a mode of transport usually reserved for criminals. This foreshadows the consummation of the affair, which occurs after the rescue. Essentially, Lancelot breaks his contract with his king and becomes a criminal or social outcast through his actions. Critically, his role as the King’s First Knight does not change, but has been sullied.

So we have parallels for Rhaegar as Arthur married to Elia as Gwenhwyfar. By all accounts, Rhaegar and Elia, like Arthur and Gwenhwyfar, had a marriage of mutual respect and fondness, if not passion. Arthur Dayne, the Sword of the Morning, legendary kingsguard and “bravest of knights” is Lancelot, King Arthur’s First Knight who before he learned his true name was known only as “The White Knight.” Here’s where it gets sticky. It’s hard to see a parallel here with Arthur Dayne and Elia Martell. If there were some previously existing relationship between the two Dornish nobles, it might have been hinted at. And if there was any reason to suspect the fabled White Knight had broken his vows we’d surely have heard of it. So how to resolve the question of Lancelot? And how does Lyanna Stark fit into this equation? As usual, with GRRM things are not so straightforward, as our next installments will show.