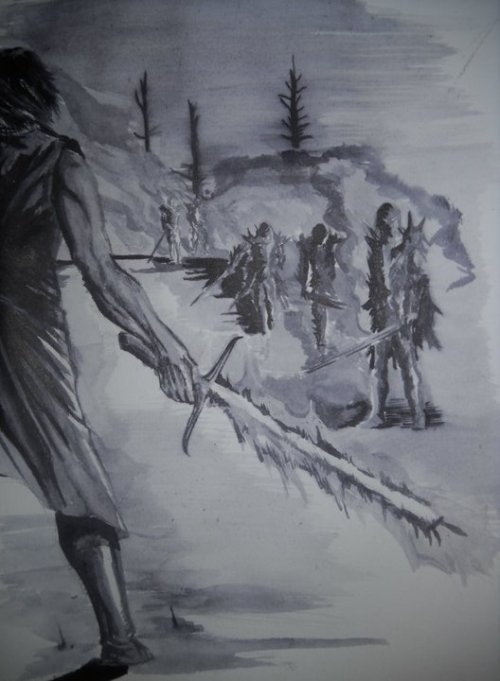 If Lightbringer was merely a sword – why was it such a great weapon?

We learn of the forging of Lightbringer in Salladhor Saan’s tale. It seems that during the last Long Night’s “darkness” Azor Ahai forged a very important blade, which the Jade Compendium tells us was thrust through the belly of a monster. Further importance is given to this legendary sword as Melisandre frequently mentions its prophesied return, and how essential it could be in the upcoming war against the Others. The primary question about Lightbringer is how a single blade could possibly be so important against an army of Others and wights. What could be so special about this sword?

First of all, the Legend of Lightbringer indicates that upon being thrust through Nissa Nissa’s heart, the blade was set alight, and presumably burnt without fuel. This fire would have given him a great advantage when fighting Others and their army. We see with Samwell’s smouldering log how easily wights succumb to fire where blades have failed; Lightbringer’s flames  giving it the ability to kill wights would be a functional purpose.

But Lightbringer, as will be discussed, only seems to make sense as a weapon of enormous power if we consider that it could be made from dragonglass. Dragonglass is the only substance we know of that poses a threat to Others. The substance is ordinarily too brittle for battle, but if it could somehow be reinforced, then Lightbringer would be lethal to Others and their wights. Lightbringer being able to kill Others and their armies of undead isn’t just desirable, it’s really essential if some kind of hero is to stand against them.

Lightbringer as dragonglass begins to have huge appeal, and it’s in the study of glass candles where we can see why a dragonglass blade would be so essential during the Long Night. Glass candles are made of dragonglass, and we can learn about the magical properties of the substance by looking closely at these candles.

“It burns but is not consumed.”

“The candle was unpleasantly bright”

“The light was queer and bright, much brighter than any beeswax or tallow candle.”

“the flame never flickered, not even when a draft blew through the open door”

“The flame did not flicker, even when Archmaester Marwyn closed the door so hard that papers blew off a nearby table”

“Torchlight ran along its edge, a thin orange line that spoke of razor sharpness.”

“The dragonglass blade was sharper than steel”

“He must spend the night in darkness, unless he can light that candle. Some will try. Often they cut their fingers, for the ridges on the candles are said to be as sharp as razors. Then, with bloody hands, they must wait upon the dawn, brooding on their failure.”

So, people trying to light a glass candle do so in the dark, there are razor sharp edges around the candle, and they cut themselves, getting their blood on the candle. Marwyn goes on to light glass candles. If blood is part of the trigger here, we can see why not only the magic of ‘true sacrifice’, but also Nissa Nissa’s actual blood would be needed to set a dragonglass blade alight.

Overall a blade made from dragonglass, if it could somehow be reinforced, would be the perfect weapon against the Others: lethal to both Others and wights and a source of indefinite light and heat during the Long Night. If we imagine Lightbringer as a giant glass candle we can understand why it’s such a hugely important weapon. Dragonglass Lightbringer resolves many of the issues concerning how a single sword could stand against the Others and be so revered.

Finally, we’re told how brittle dragonglass is, it makes a good dagger, it’s sharper than steel, the Children hunted with it, but a large blade would surely break. If Lightbringer was made from dragonglass, it’s to be expected that there would some form of misdirection to put us off the idea. In the Legend of Lightbringer, it’s pointed out that Azor Ahai was making a blade “like none that had ever been”: he was making a new kind of blade, an invention. The first two attempts failed as the blade was very brittle. To remove the brittleness, he tempered the blade with Nissa Nissa’s blood  and her strength went into the blade. On the third attempt the sword had suddenly lost its brittleness and finally he had a Hero’s blade. Could the Nissa tempering have somehow removed weakness if this sword was made from dragonglass?

It’s also interesting that the Last Hero’s blade was said to be made from Dragonsteel, and also slew Others. The Last Hero was seen to have a broken sword (as we see in the Waymar prologue, standard swords can’t fight Others), and he was searching for the Children for help. Given that mankind seemed to have no weapon against the Others at that point (“no swords could stay their advance”) was the Last Hero seeking the Children to ask how to make an effective weapon? Old Nan’s story tails off before know what help the Hero received, but Bran later asserts that the ending of the story is positive, and the Hero did receive help from the Children. So we have the story of a Hero with a broken sword, then another story with a hero forging a legendary new sword. Both stories seem to be set during the Long Night, and later we’re told that the Last Hero slew Others with a unique blade of mysterious origins, while according to TWoIaF, Azor Ahai put the darkness to rout “with his blazing sword Lightbringer.”

Could Azor Ahai have been making a crude and unique form of steel, using iron and dragonglass? Is dragonsteel in fact a dragonglass alloy? Steel had not yet been invented (iron was around in the Long Night, as Old Nan states), but Azor Ahai’s blade was “like none that had never been.” Lightbringer was a new invention and an anachronism. Could the Children have advised him and told him about dragonglass, or let him glimpse the future? All of this is possible if Azor Ahai was the Last Hero – a man who had no blade to fight his foe, and in a time of necessity sought the Children, going on to forge a unique blade with which he slew Others. The ‘steel’ anachronisms found in the Lightbringer and Last Hero’s tale might be resolved by the presence of Greenseers. In a story where characters can see the future, anachronisms are perfectly possible.

Overall, Lightbringer could have been a great weapon during the last Long Night, if it was made of dragonglass. Lethal against all foes and perhaps the only source of heat and light for miles on end, this is a weapon that could have been the Others’ achilles heel, and triggered a resistance against their advance. This is why Azor Ahai’s sword was so crucial for the survival of man’s cause that it’s still being discussed thousands of years later, and is even alluded to in the Night’s Watch vows. The World of Ice and Fire makes it clear that the wielder of Lightbringer, Azor Ahai, was known by many names. We suggest that following the Long Night, in Westeros he was simply known as the Last Hero.

As discussed in Radio Westeros: Episode 08 — Fear is for the Long Night