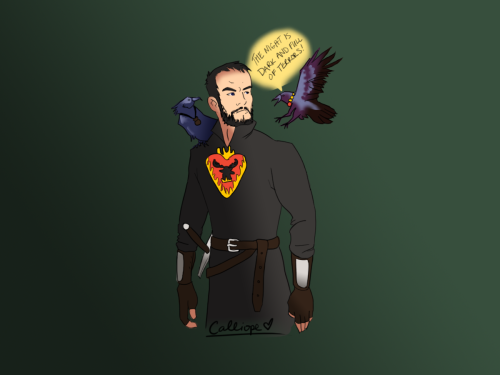 Stannis stood abruptly. “R’hllor. Why is that so hard? They will not love me, you say? When have they ever loved me? How can I lose something I have never owned?” He moved to the south window to gaze out at the moonlit sea. “I stopped believing in gods the day I saw the Windproud break up across the bay. Any gods so monstrous as to drown my mother and father would never have my worship, I vowed. In King’s Landing, the High Septon would prattle at me of how all justice and goodness flowed from the Seven, but all I ever saw of either was made by men.”

“ — why trouble with this new one?” Stannis broke in. “I have asked myself as well. I know little and care less of gods, but the red priestess has power.”

Yes, but what sort of power? “Cressen had wisdom.”

“I trusted in his wisdom and your wiles, and what did they avail me, smuggler? The storm lords sent you packing. I went to them a beggar and they laughed at me. Well, there will be no more begging, and no more laughing either. The Iron Throne is mine by rights, but how am I to take it? There are four kings in the realm, and three of them have more men and more gold than I do. I have ships . . . and I have her. The red woman. Half my knights are afraid even to say her name, did you know? If she can do nothing else, a sorceress who can inspire such dread in grown men is not to be despised. A frightened man is a beaten man. And perhaps she can do more. I mean to find out.

“When I was a lad I found an injured goshawk and nursed her back to health. Proudwing, I named her. She would perch on my shoulder and flutter from room to room after me and take food from my hand, but she would not soar. Time and again I would take her hawking, but she never flew higher than the treetops. Robert called her Weakwing. He owned a gyrfalcon named Thunderclap who never missed her strike. One day our great-uncle Ser Harbert told me to try a different bird. I was making a fool of myself with Proudwing, he said, and he was right.” Stannis Baratheon turned away from the window, and the ghosts who moved upon the southern sea.

“The Seven have never brought me so much as a sparrow. It is time I tried another hawk, Davos. A red hawk.”

George R.R. Martin, A Clash of Kings, Davos I

In the preceding passage from ACoK, Stannis talks about his disillusionment with the Seven after he witnessed his parents’ deaths in a storm on Shipbreaker Bay. He then goes on to equate the Faith of the Seven with his one-time pet goshawk Weakwing, while suggesting that the faith of R’hllor might be a different kind of hawk altogether. Not only does this discussion reveal Stannis’s pragramtic and somewhat cynical view of religion, but it also leaves room for correlating Davos and Melisandre with these two religions. In this sense one could view Davos and Mel, who are arguably the chief of Stannis’s advisers, as the opposing birds on his shoulders. Perhaps like Odin’s ravens Hugin and Munin, who represent thought and memory, or the shoulder angels of Christian iconography, Mel and Davos represent a duality in Stannis’s thinking that in his cynical pragmatism he feels free to embrace.

It has been argued that Stannis grows in flexibility surrounding the issue of religion as his arc progresses, and it’s possible this could be tied to Davos’s rise as a principal adviser. In this sense Davos could represent, perhaps not the Seven precisely, but respect for the faiths of the fathers in something that might be called memory, as embodied by Odin’s raven Munin. Melisandre, on the other hand, represents the new faith, prescience and forethought, or the concept of thought as embodied by Hugin.

We first see both Davos and Melisandre in Cressen’s point-of-view chapter, where we learn that Davos and Cressen seem to have a mutual respect, while Cressen and Melisandre have a mutual wariness. Cressen finds Mel’s influence on Stannis to be dangerous, to say the least. When a comment by Selyse makes it plain to him that Melisandre will advocate, if not foster, Stannis killing Renly, Cressen determines to kill Mel. Yet we know from Mel’s point of view in ADwD that the first thing she had learned to see in the flames, and the first thing she always looked for, was danger to her own person. While Stannis later confesses he did not want Cressen to die, he appears to suggest there was some inevitability to his death, meaning Mel has convinced him that it was necessary and, if we know anything about Stannis, just. Davos, on the other hand, tries to remind Stannis of Cressen’s wisdom and faithfulness. When Davos determines to kill Mel himself after Blackwater, she again proves that she is aware of dangers to herself. Later in ASoS, while smuggling Edric Storm to freedom, Davos asserts that Mel perceives these dangers in her flames. He has reached any uneasy stalemate with the Red Woman, based mostly upon the conviction that no mortal weapon could stop her.

Both Mel and Davos exert greater influence upon Stannis than any other adviser we see until Jon Snow convinces him of his course of action relative to the North in ADwD. It is Mel who directs most of his policy in ACoK, with her promises of delivering his kingdom to him using the divine power at her disposal. She brings him to Storm’s End and his brother’s death. Because she has interpreted her vision of the Blackwater defeat as a morrow never made she encourages Stannis in besieging the city, going as far as to predict victory, though Davos remains naturally cautious. After the defeat of the Blackwater becomes reality, Stannis retreats to Dragonstone to grind his teeth and consider his options. Melisandre begins to prepare Stannis to turn his focus to the battle to come:

These little wars are no more than a scuffle of children before what is to come. The one whose name may not be spoken is marshaling his power  . . . a power fell and evil and strong beyond measure. Soon comes the cold, and the night that never ends.

From ASoS onwards Davos is given increasing access and trust due to his loyalty and pragmatism. Both Mel and Davos prove to be devoted to Stannis, and are quite single-minded and confident of what they believe in, so they do share some common ground in spite of their obvious differences. The result is that they are great foils to each other. While Melisandre advocates a very black-and-white world view, which seems on the surface to fit with Stannis’s all-or-nothing view of justice and truth, Davos has a more nuanced viewpoint. Davos has the appearance of being very black and white, with his devotion and loyalty to Stannis framing his commitment to truth. But, like Stannis, he can see value in actions that perhaps Mel cannot. In relying upon her flames, Mel can sometimes miss the simple conclusions about people that Davos sees quite clearly. This, along with his commitment to truth, turns out to be exactly what Stannis values, as we see when he raises Davos to a Lordship and the office of Hand of the King:

[D]o you swear to serve me loyally all your days, to give me honest counsel [emphasis mine] and swift obedience, to defend my rights and my realm against all foes in battles great and small, to protect my people and punish my enemies?

In spite of Davos’ objections, Stannis reminds him that “All I ask of you are the things you’ve always given me. Honesty. Loyalty. Service.” What Stannis needs is someone honest and sensible enough to help him win his temporal kingdom in advance of the great battle Mel is preparing him for.

Following the escape of Edric Storm, it seems that in spite of Davos’s transgression, Stannis cannot bring himself to let go of one of the only two honest and faithful advisers he has. When Davos presents the letter from the Night’s Watch which contains information Davos knows Mel has seen in her flames, we see perhaps the first intersection of their agendas.

From Davos’s viewpoint, the defense of Westeros from the Wildling threat is a pragmatic strategy aimed at gaining the support of the northern lords by defending the kingdom as the true king should. As he tells Stannis, “[You] had the cart before the horse . . .[,] trying to win the throne to save the kingdom, [rather than] trying to save the kingdom to win the throne.” Mel on the other hand, sees the Wall as the place where the next battle for the Dawn will begin. In her view, Stannis as Azor Ahai Reborn is man’s savior from an endless winter. Yet for the first time in Stannis’s quest for the throne, his principal advisers have a common recommendation.

Once Stannis begins to balance the advice of these two, to consider both thought and memory as it were, his way must seem more clear. Certainly he sends Davos on his pragmatic mission to raise White Harbor with a clear goal of gaining the support of northern lords. Mel remains at his side to advise him on what the flames tell her about the Enemy and the battle to come.

Both Melisandre and Davos are invaluable resources for Stannis. From providing him with supernatural knowledge to giving him steady and honest advice, without these two voices on his shoulders Stannis’s way forward might not have been clear to him, and his opportunities and successes may have been dramatically different. Though their voices are sometimes in opposition, their common goal of success for their King unites them in a unique and powerful way.

As discussed in Radio Westeros Episode 07: Stannis- A Just Man

Artwork courtesy of Calliope, with many thanks!